What’s up, Marytree family!?  We are very excited to announce that we’re hitting the road June 21st for our first national tour!  Back in January we released our album “Chipper” and have been working these past few months putting together a tour that will have us literally reaching all corners of the United States.  We have SO MANY PEOPLE all across the country to thank for helping us realizing this dream of ours, man!

Come see us in a town near you and experience Chipper live and in your face!  For those of you not able to get to one of the shows, keep a lookout for livestream, and of course we’ll be putting out lots of videos through our YouTube channel (www.youtube.com/marytreemusic).  We want you to be part of the shenanigans… 😉 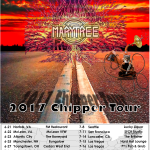